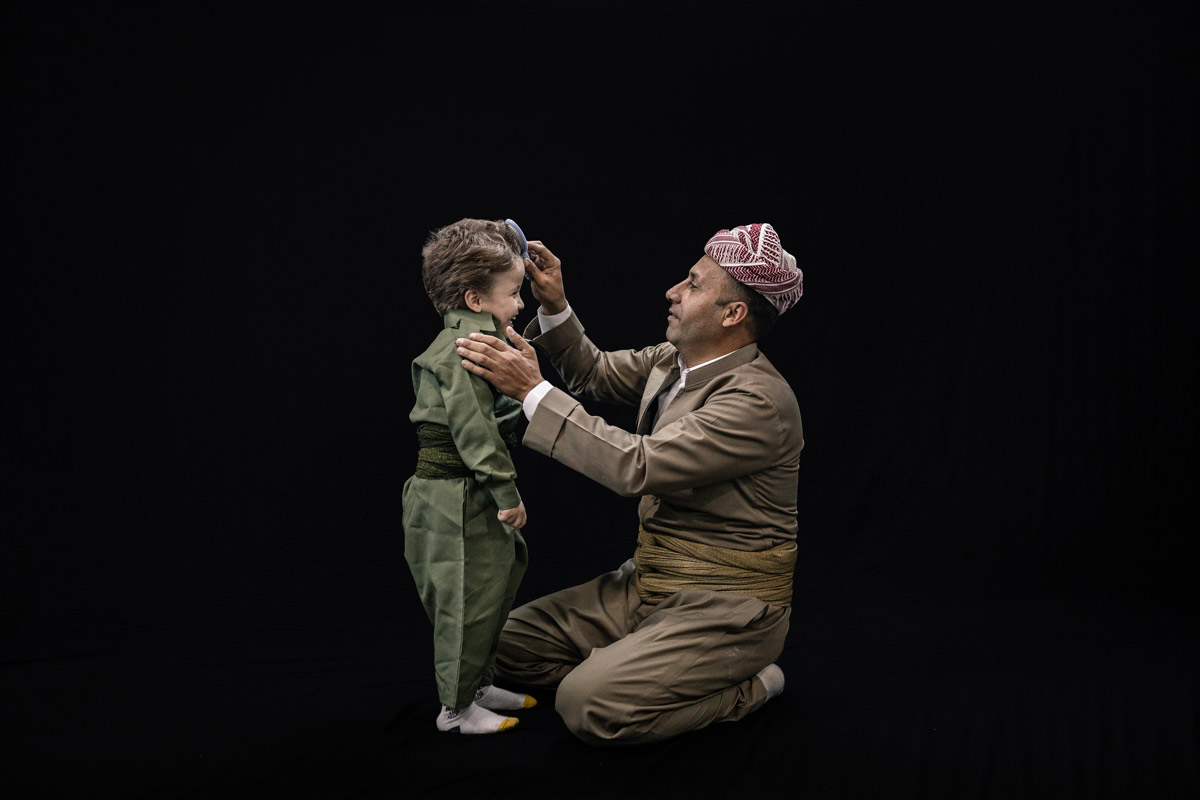 All images by Younes Mohammad

In his series “Open Wounds,” Iraqi Kurdish photographer Younes Mohammad tells the stories of Peshmerga veterans and their families battling war’s physical and mental marks. Younes, who has worked as a photojournalist and translator during the fight against the Islamic State, shifted his practice towards an artistic approach to portray his subjects in a way that differs from fast-paced news media coverage.

“While photographing the series, I decided to use a plain backdrop because I didn’t want to distract from the subjects,” explains Younes. “I concluded that I would achieve my primary goal of telling the families’ stories by using artistic tools like the black fabric in the photos. If I didn’t do this, my work wouldn’t go beyond the short life cycle of news photos, and I would lose the closeness I wanted the audience to experience with the subjects. In fine art, I can work more creatively, and this creativity is essential to the project’s success.”

The strength of the series lies in its humanistic approach. Younes portrays the veterans and their families in an empathetic way. The images reveal the tragic truths and realities of those living through war and whose stories often remain untold. “Most of the men had severe physical injuries. They have lost arms, legs, and eyes. The bodies are so riddled with bullet and shrapnel wounds that simple movement causes excruciating pain,” Younes explains. “Tragically, their suffering does not end after they have returned home. The men face new challenges, such as obtaining prosthetics, ongoing care, and providing for their families despite their injuries.” By telling the stories of these men and their families, Open Wounds is also a call for peace and clear anti-war statement.

Bahman’s sons Dawoud 12, and Mustafa, ten, take off the sock of their father’s prosthesis.

Chatin Mohsen Taher and his sons. Chatin was born in 1985 and joined the Peshmerga as a volunteer in 2014. He was wounded fighting ISIS in February 2015 in Wanke in Mosul province. For treatment, he went to Turkey and Germany. According to media reporters, more than 10,000 Peshmarga were wounded in the war.

“For the series, I talked to several hundred Peshmerga. I remember visiting a veteran wounded by an IED (improvised explosive device). He had undergone more than twenty painful surgeries and still needed more. After we finished talking, I asked him to prepare for the photoshoot. When we stood up and were about to leave the room, his small daughter suddenly started crying very badly. The mother said: ‘She thought you were a doctor and wanted to take him to another surgery. She is crying because she is worried for her father.'”

The consequences of the conflict have altered the lives of the veterans and their family members forever, many of which have post-traumatic stress disorder (PTSD). Younes reminds the viewer that war has long-term consequences affecting successive generations and entire societies. After years of documenting the fight at the frontlines, also Younes had to battle trauma. The realization that he had PTSD slowly revealed itself to him.

“At first, I did not understand many of my behaviors or their causes. I didn’t sleep or eat, and I hated everything related to the war and the ugly noises that came with it: the cries of the wounded and the displaced kept echoing in my head. When I was home, my mind was still on the front lines or in the refugee camps, and I realized I was not ‘home’ at all — there was no home for me. I often would become very nervous, and I would start arguing with my children and my wife. I was alone and isolated and did not talk to anyone.”

Hawar Mohammad Abdullah was wounded two times in combat against ISIS. He was shot in 2015 in Mara Village and only one hour later wounded by an IED (improvised explosive device). His treatment and recovery took six months before he would return to the frontlines. In September 2017 Hawar was again wounded by an IED. He was in a coma for 33 days. He shortly after also lost his pregnant wife who suffered a heart attack and died. Hawar, who underwent 5 surgeries, has lost his left ear and still needs more treatment to hopefully preserve his leg.

Sabri Lavand Omar was born in 1956. He has been a Peshmarga since 1974. He was wounded fighting ISIS in July 2014, shot by a direct sniper bullet in Sinjar in Mosul province. For treatment, he went to Turkey.

Before pursuing photography and documenting conflict, Younes lived as a refugee in Iran from 1974 to 1998, where he graduated with an MBA from the University of Tehran. In 2011, he decided to capture the contemporary history of his country with his camera. Younes found himself in many life-threatening situations while working as a photojournalist and translator for international newspapers and magazines.

“I remember a particularly tough day on the frontlines when all around us were IEDs. There were so many of them that we were afraid to walk. We heard one explosion after another. There was a doctor on the phone screaming for more ambulances. He was begging them to arrive as soon as possible. “These kids are dying,” he screamed. “Send whatever you can, any car you see.” Everyone around me is either fighting or helping, and I am taking pictures. I see a wounded soldier limping back. I look at him. He laughs and says: “Don’t worry, I will get well soon.” I offered him my help, and he says: “Do your job!” I ask myself, “Which job?” Photography has suddenly become a job. People are dying, and I feel I have to do something else. “I’m here to take pictures,” I remind myself. Now, the doctor begins to transport the injured men by carrying them on his back. From time to time, an ambulance makes its way to us. The doctor can no longer hide his tears, his hands are full of blood, and he does not look like you usually would picture a doctor.

Then there is another explosion. This time the doctor gets injured. The Peshmerga take him behind the line while we continue to move forward. I have never seen so many people wounded. One or two hours have passed, and now everything is calmer. Sometimes I hear the sound of shooting in the distance. Then I see the doctor returning with a bandaged face and surprisingly full of energy. I ask, “Why did you come back?” He looks at me, does not answer, and passes. His whole bandage is red, and he is still bleeding. He is not at all like any doctor I have ever seen.”

Brahim Ahmad Ebrahim Ghader, born in 1969, has been a Peshmarga since 1993. He lost both legs and one eye during the explosion from an IED. There still remains shrapnel in his body.

Weshyar Aziz Maghdid, born 1981, with his family. He was wounded in August 2014 by an IED. He lost his left leg and left eye and the hearing in both ears, especially the left one, and there is shrapnel throughout his body. He has three kids: Rayan born in 2011, Rozhin born in 2015, and Ahmad born in 2019. His wife Chenar Khalid Abdullah was born in 1987.

After witnessing traumatizing situations like these, it was tough for Younes to process his emotions. One day he talked to a journalist friend from Australia who recommended leaving Kurdistan and and seeing a therapist. “I called two psychologists, one in Chicago and another one in Tehran. Both diagnosed me with PTSD. The therapy took about two years. I feel much better today, but I’m not the same person anymore. I healed, but I doubt I’m normal.”

Over time I slowly felt myself changing. Today I live more consciously and accept others the way they are. It is as if the war experience has changed my character. Since my treatment I have found more love and affection for everyone and I deal with things more patiently. I do not feel hatred or resentment for anyone. Now more than ever, I notice and appreciate beauty. On the one hand, the war destroyed me, and on the other, it made me a completely new person.”