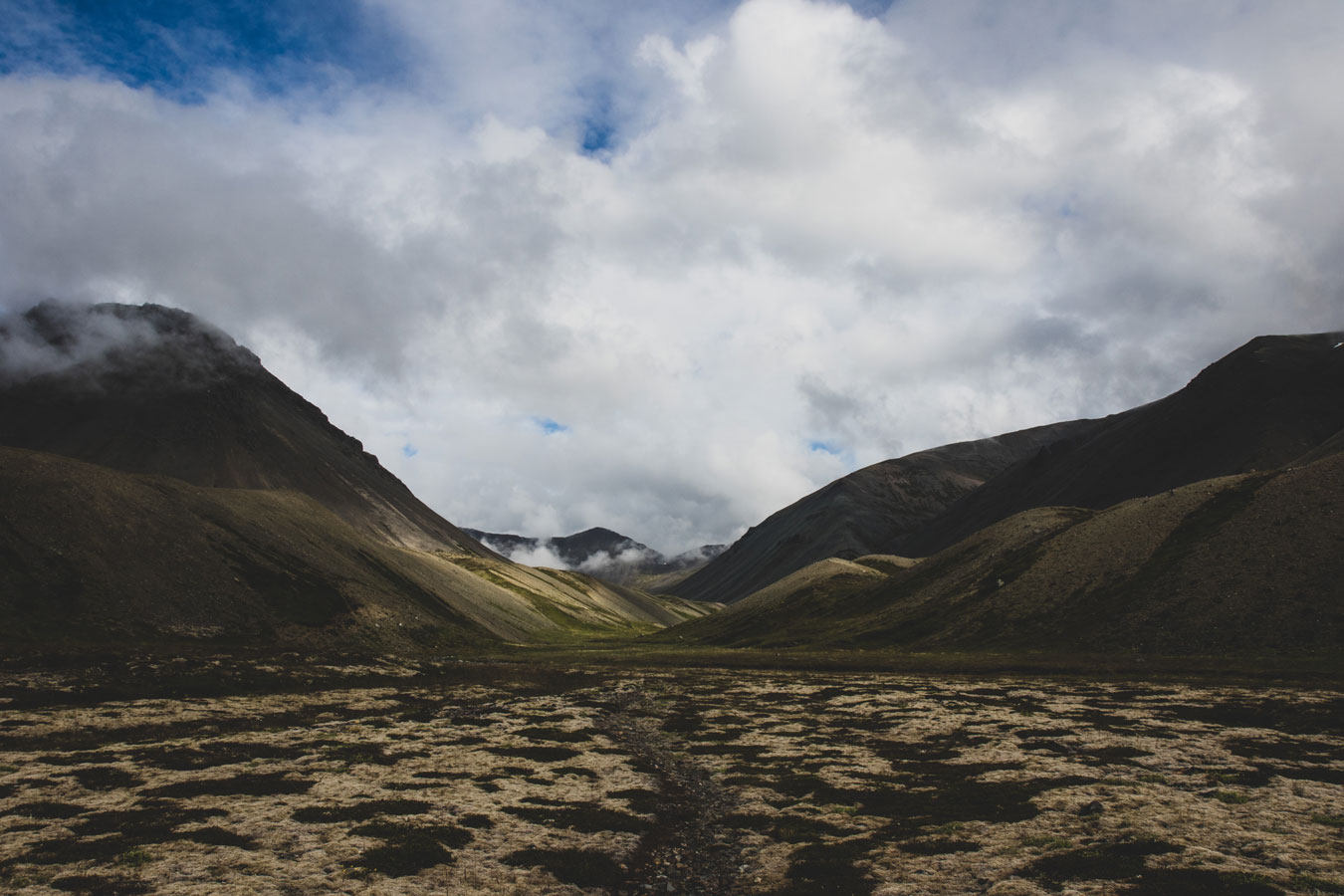 The two nature guides Henry Fletcher and Jay Simpson, lead walking artist residencies and conservation camps along ancient herding routes in Iceland’s Westfjords. Here they share their experiences with the art of walking in the wild.

“Sit as little as possible; give credence to no thought that is not born in the open air,” Friedrich Nietzsche wrote in “Ecce Homo.” He preferred to spend his time hiking in the Swiss Alps or taking long walks by Lake Geneva rather than sitting at the desk in his study. Philosopher Jean-Jacques Rousseau knew that “when I stop, I cease to think; my mind works only with my legs.” And the naturalist and author Henry David Thoreau walked at least four hours every day, “sauntering through the woods and fields absolutely free from all worldly engagements.”

Alongside philosophers, also artists integrate walking into their creative practice. Dada members were the first to write the manifesto “Excursions and Sightseeing” in 1921. They went on tours to “places that have no reason to exist” while reading poetry along the way. In 1967, British land artist Richard Long set on a journey from Bristol to St Martin’s. On the way, he stopped in a field in Wiltshire, where he walked back and forth until a path became visible in the grass. In 1988 Marina Abramović and her partner Ulay collaborated on their final artwork together. For the piece “The Lovers: The Great Wall Walk,” the two artists hiked 2500 kilometers along the Chinese Wall from different starting points. Ulay set off from the Gobi Desert and Abramović from the Yellow Sea. After three months, they met in the middle, where they ended their relationship.

Wayfinding in the Westfjords: Walking Artist Residencies in Iceland

The two nature guides Henry Fletcher and Jay Simpson, practice the art of walking in the jagged landscape of Iceland’s Westfjords with its glaciers, moss-green mountains, hot springs, black sand beaches, and basalt cliffs. Before the pandemic, they led conservation camps and walking artist residencies along ancient herding routes in the region. Henry, a trained facilitator from the UK, had fallen in love with the Westfjords in 2010. He came to the area for a master’s program in coastal and marine management. “Alongside studying, I was also doing a lot of hiking, sheep farming, and fishing in the rural areas to learn about the region’s cultural ecology,” he says.

“At the end of my studies, I returned to the UK and eventually found my way down to South Africa where I met Jay, and we ended up guided a long-distance hiking trail together.” Since then, Jay, a National Geographic Emerging Explorer Grantee from the US, and Henry became collaborators and close friends. “In South Africa, we were working on a conservation project together,” Jay adds. “We helped farmers in identifying hiking trails on their land, which allowed them to generate additional income from ecotourism. The project resonated with me as it had this conservation-in-your-own-backyard-approach. A few years after South Africa Henry told me, he wanted to start a similar project in Iceland.”

The project inspired Henry to return to Iceland and start a similar endeavor in the Westfjords, engaging the visitors with the local communities. “To map out the trails, I managed to get funding from local government sources and prototyped some of the paths to see whether they were feasible,” he says. Henry’s idea was to offer an alternative to the popular tourist tracks along Iceland’s ring-road. It’s easily accessible by car and therefore very popular among tourists. To reach the remote Westfjords instead can be a challenge. In winter, the only two roads leading to the region are often closed; flights get canceled continuously.

“It’s a demanding place. It gives as much as it takes. But spring and summer are just mind-blowingly beautiful. Because of the midnight sun with its 24 hours of daylight, you end up not sleeping; there’s just so much opportunity to be outside exploring and enjoying the wide wilderness. It feels like a hidden playground, as not many people find their way to the Westfjords.” And Jay adds that although the landscape is rough and appears hostile, it takes care of you at the same time. “On our tours, we would encounter vast fields of blueberry bushes; we collected mushrooms and sorrel. The place has just so much to offer, and learning about foraging also changed the way I engaged with the Westfjords.”

Confined to their homes, Henry and Jay started to distill their six years of field experiences into a book project. “Our materials invite the reader to find their way through the Westfjords or to ‘wayfind’ using the practices of wild-walking and camping, foraging, storytelling, ceremony and ritual, creative response and engagement with the region’s cultural ecology,” reads the description on their website. They will publish three guidebooks in the summer via a Kickstarter campaign. It includes maps with satellite imagery and GPS data to navigate 21 herding routes. “We researched and identified the routes by referencing old maps like The Western Fjords by Einar Þ Guðjohnsen. We also chatted with local people who love hiking and still have knowledge of the old pathways,” Henry explains.

In the beginning, Henry set up and led the multi-day walking artist residencies with artist Tanja Geis. Her practice includes research-based and site-responsive paintings, installations, and video, exploring liminal and mongrel ecological spaces as zones. The walking residencies’ objective was to help the participants slow down from their fast-paced everyday lives. Wayfinding enhanced their consciousness, which is a crucial element of the creative process. While exploring the Westfjords, Henry and Tanja also hoped to inspire the artists to orientate their work towards the ecological. Henry describes the outcome as a “sum greater than the parts – an unpredictable cross-pollination of creative energy and souls.”

Jason deCaires Taylor: “I want to highlight aquatic places in all their diversity”

After a few years leading walking artist residencies, Henry expanded the project by conservation camps set up with Jay. Their work doesn’t follow any schedule. The participants can freely meander through the wild, experiencing the place. Henry and Jay are as process-driven as the artists who participate in the trips. As guides, they respond to the needs that people may be arriving with or emerge along the way. “At the beginning, we do a fun exercise to get to know each other,” Jay says. “Each sentence must begin with ‘Yes, And….’.The following sentence must refer to one statement from the previous sentence. It’s a great tool to break the ice and also helps to let the creativity flow.”

Henry Fletcher (right): Facilitator, storyteller, and guide across different ecological zones: mountains, farmland, and the ocean. Jay Simpson is a National Geographic Emerging Explorer Grantee and digital storyteller trained in anthropology, his work focuses on our understandings and relationships with wildlife and land.

Jay and Henry have a unique approach to their facilitation practice that differs from conventional adventure trips. “When people first come across our work, they might get the impression that we are the exploring-new-frontiers-and-conquering-extreme-environments kind of guys,” Henry says. “But there’s a far more interesting element to that. On earth, it seems that there is almost no place that humanity hasn’t already discovered. We need people to be just as courageous and brave exploring new frontiers internally. That’s how we approach our facilitation practice. It’s about creating a safe space that allows the participants to connect to the place and to the self.”

While outside reconnecting with nature, walking, and contemplating in the Westfjords, the participants take a break from their fast-paced modern lives. Or to put it in the words of American author Rebecca Solnit: “Ideally walking is a state in which the mind, the body, and the world are aligned, as though they were three characters finally in conversation together, three notes suddenly making a chord.”