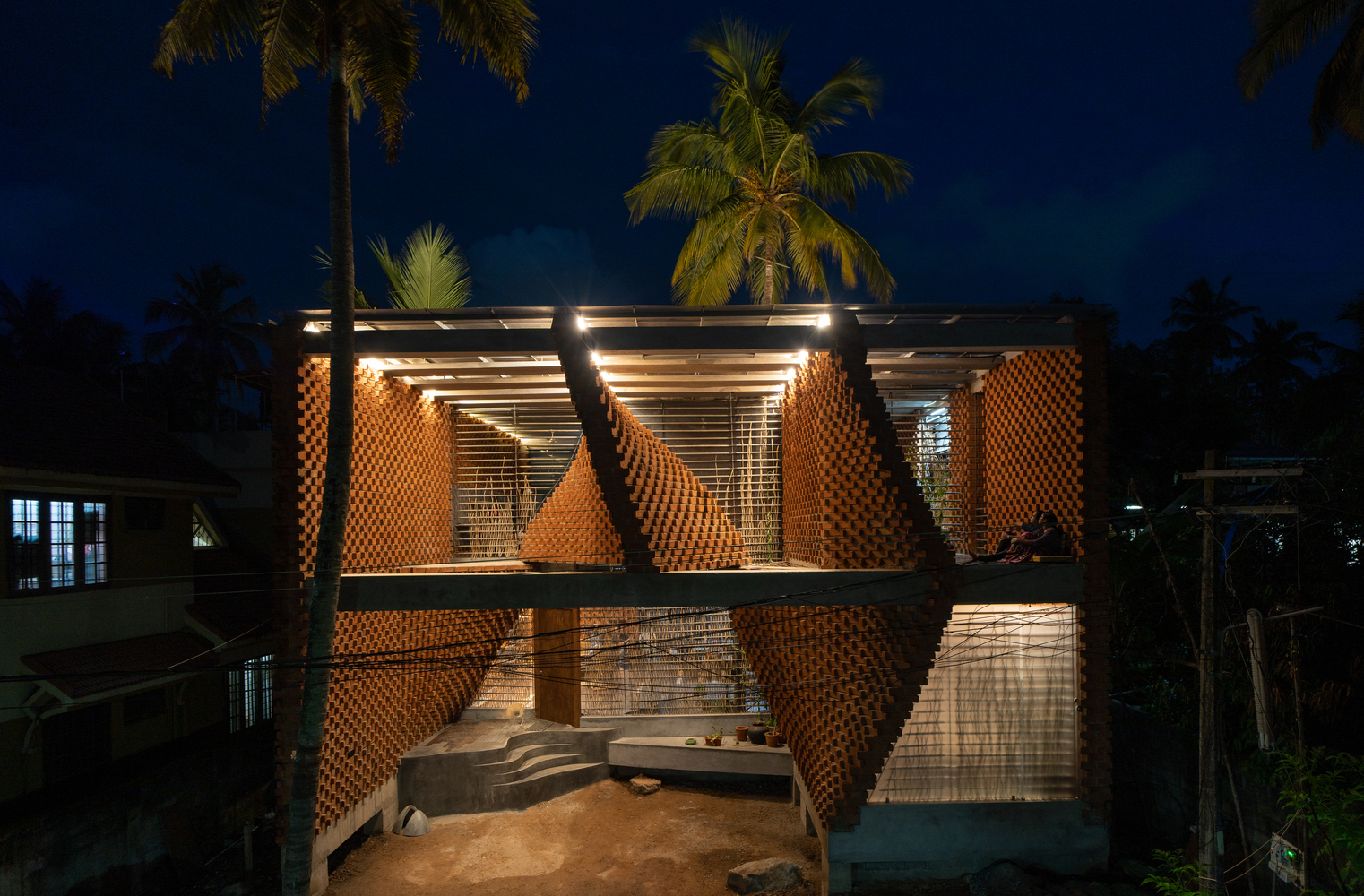 Building Towards a Better Future

India-based architect and engineer Vinu Daniel creates award-winning buildings with waste materials and earth. But before gaining international recognition for his eco-sensitive construction techniques and materials, Daniel had to overcome many obstacles. In our interview, he shares his journey and design philosophy.

What motivated you to focus on researching eco-friendly architecture? Was there a pivotal moment for you?

Vinu Daniel: I grew up in the concrete jungle of Dubai, a desert city with many modernist glass buildings. In Dubai, we always look to the West for reference. So we replicated the tall skyscrapers with massive glass facades like in New York and even an indoor ski slope without any sense of rationality, wasting enormous amounts of energy and resources. As every building has air conditioning running nonstop in the United Arab Emirates, we are one of the world’s top five power consumers. I didn’t want to be part of this kind of architecture.

When I came to India to study architecture at Trivandrum’s College of Engineering, I spent a lot of time in classrooms and didn’t see much of the country. My cousin recommended traveling to rural areas in India to learn more about the diverse cultures and architecture. So I was looking for thesis projects that allowed me to travel, and I chose to go to very remote places close to the Rajasthan Gujarat border. I found fantastic traditional, local architecture, such as mud huts that were 10 feet high. A Kutch family invited me to stay in their home, a circular mud dwelling called Bhunga with a thatched roof and a magnificent natural indoor climate due to its thick walls, no air conditioning needed. In Dubai, we are so used to air-conditioned environments that we become unfit for outside living. The body cannot adjust to the heat, so you sweat a lot and get exhausted quickly. Visiting these rural places was an eye-opening experience and a truly pivotal moment for me. I knew I wanted to make architecture that is resourceful and eco-friendly while considering the context of a site.

The Pirouette House features the “Last of the Mohicans” fired bricks as an ode to the stellar practice of Laurie Baker with spaces that are made beautiful by the pure geometry and patterns created by the walls that seem to be coming alive and pirouetting around. The Rat trap bond is a brick masonry method of wall construction in which bricks are placed in vertical position instead of conventional horizontal position and thus creating a cavity within the wall that increases thermal efficiency, cuts down on the total volume of bricks used, and is ideal for concealing structural members and service ducts. Text by Wallmakers

You also mention Laurie Baker, known as the “Gandhi of Architecture,” an essential inspiration for your work.

Vinu Daniel: Laurie Baker introduced a sense of rationality to Indian architecture that promotes indigenous building techniques while avoiding extravagant designs and opulence with no functionality. That resonated with me. I was fortunate to meet Baker in the context of a university competition in Kerala. At that time, I was disillusioned with architecture and almost quit my education to become a musician. I couldn’t understand that any other field, such as the automotive or agriculture industry, was regulated, whereas architects were free to practice their nonsense without consequences. Laurie Baker invited us, the students, to his home one afternoon, and I got an incredible insight into his world for around four hours, which changed my attitude towards architecture.

What design philosophy of Laurie Baker resonated with you?

Vinu Daniel: Laurie Baker followed Mahatma Gandhi’s belief that all materials for constructing a house should be sourced within a five-mile radius. This philosophy made sense to me. I also noticed a lot of waste accumulating in urban areas and close to a site, so I thought about recycling and integrating it as a building material. After my graduation, I continued my education in sustainable architecture at the Auroville Earth Institute, where I learned more about the engineering processes behind building with soil and participated in the UNDP (United Nations Development Programme) Post-Tsunami construction. I developed and patented two materials called “Debris Wall” and “Shuttered Debris Wall,” where waste materials, soil, and cement are mixed.

The Shikhara Residence is set against one of the silent hilltops of Trivandrum, the site was located at the highest point in that particular part of the woods. However, being a west-facing site one would have to hold up a hand to shield their eyes from the harsh west sun. That ‘hand’ was reimagined as a slanting wall along the site giving birth to the concept of conceiving the residence as – Shikhara ( Peak)Text by Wallmakers

What were the most significant challenges in finding clients when you started your studio in Kerala after graduating from Auroville?

Vinu Daniel: I was good at convincing people of the advantages of building with earth and scrap materials. So I managed to get my first client and start the project but finishing it was a challenging and painful process. I received a lot of criticism from people who questioned the safety of the building. To prove that my construction methods and materials are safe, we had to go through many legal battles over the years. But in the end, we won all of them.

The people’s resentment went so far that my workers were even attacked one night, and the tires of my jeep were punctured. To settle the dispute, I called my uncle for help, who was a respected figure in the area, and when he came to the site and saw what I was doing, he liked it so much that he contracted us to build his house, which is known today as the “Valsala Cottage.”

The Valsala Cottage has also been featured in the book “Architecture in India” by renowned Harvard professor Rahul Mehrotra. Was that your breakthrough?

Vinu Daniel: That project changed my career, and my building practice became more accepted in the public eye, and finally, people started to trust my process. It’s funny. I still remember my very first client, who was worried about the safety of his building and became so hesitant that in the end, he only allowed us to construct the compound wall of his house. That’s also why we ironically called our studio Wallmakers. I never really thought we would be doing anything other than walls. My expectations after all these years of trying to convince people were quite humble. It’s been a long journey since then. I always thought it would get easier with experience, but every new project is different, and every time you pray for a new design epiphany.

How do you approach a new project? Is there a process that has proven beneficial?

“Superblocks” Barcelona: Blueprint for the Green City of the Future?

Vinu Daniel: We are always focusing on the characteristics of the site itself. The surroundings are defining how we built the house so that it respects the ecology of a place. For example, a client of mine had a property with a swamp. Usually, you would think about drying it out in such a scenario as it hosts insects and snakes and people generally consider it dirty. But actually, the swamp is an ecosystem full of thousands of different species. The wetland also plays an essential role in the percolation process. It’s an ecosystem so much more functional than a home to only four people. So I told my clients, “the swamp has to stay,” and luckily, they agreed. I would even say I’m more proud of what I didn’t build or rather what I was able to preserve than of the house itself. And with every new project, I become a student of the land again, and the site will define the process.

The design of this residence breaks the shackles of a lot of generic ideas. The main concern while designing was to avoid creating an environmental imbalance in the area as it was a low-lying region. The idea was to raise the building from the ground, consequently forming a pond at the lowest point in the site which edges into the house with a staircase dangling over it. Text by Wallmakers

You mentioned earlier that you were disillusioned with architectural education before you met Laurie Baker. Why?

Vinu Daniel: Every graduate who comes out of university knows how to draw an airport which is a technically challenging task. But if I give those architects a brick and ask them to build a pavement on the side, they wouldn’t know what to do with it. So we have architects with a title who can sanction buildings, but they don’t know anything about the practical building process because they are basically draftsmen.

The western education concept teaches you a lot of theory and analysis, which is essential, but there is not enough emphasis on the practical aspects. Architectural education is still very much based on the white-collar concept, which I feel is even more followed by developing countries. There is this notion that if you touch a brick, you are getting your hands dirty. And the architect is only supposed to be delegating, drawing, and sanctioning.

What would you recommend to young architects to avoid becoming draftsmen?

Vinu Daniel: Instead of looking for another master’s program at a prestigious university, I would recommend starting to work on a construction site, learning from the masons. Carry the cement and sand on your shoulders, so you will understand how heavy your building is. That’s the best way to learn about materials and experience the characteristics and challenges of a site. As an architect, you are responsible for what happens on a site, so I feel it’s very beneficial if the architect understands everything about the practical process in addition to the theoretical part.