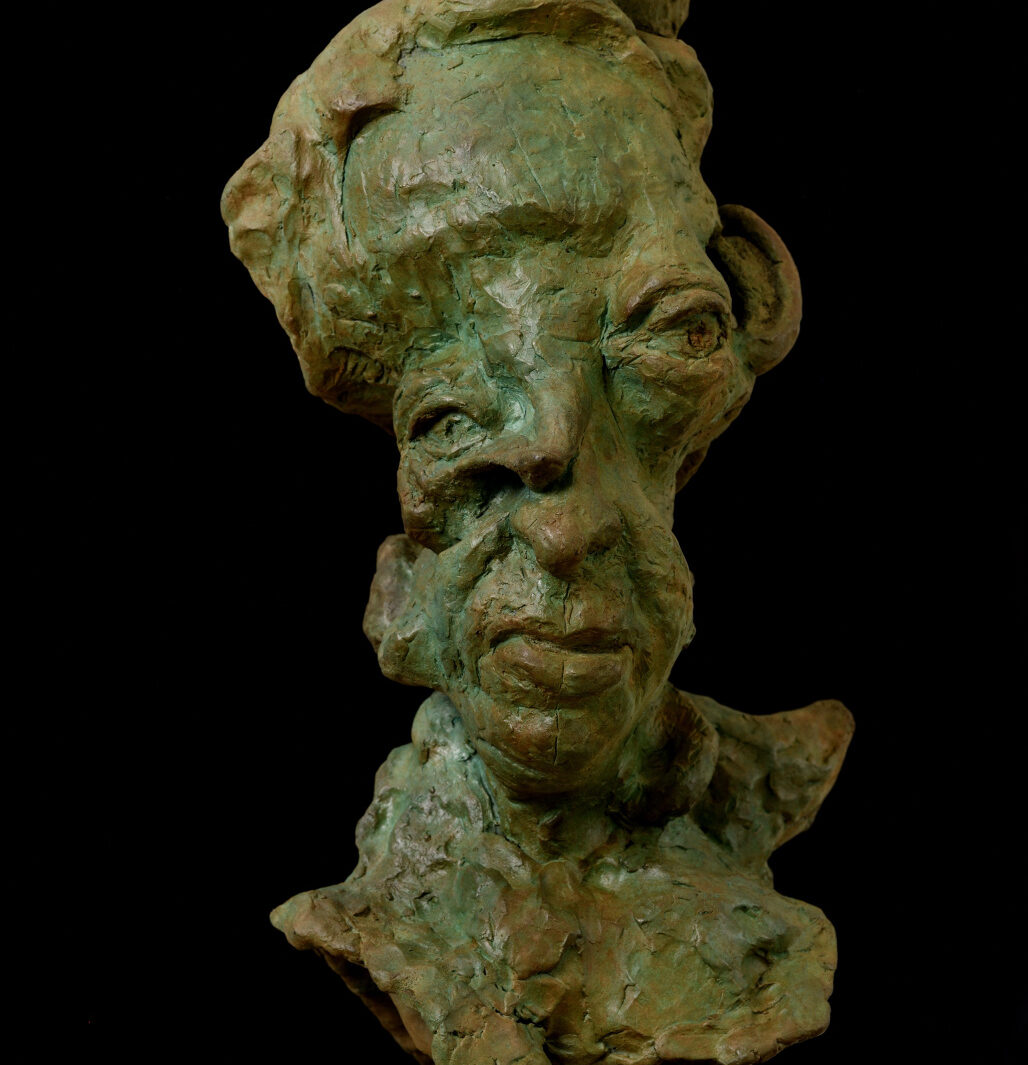 The War Within: In “Open Wounds,” Photographer Younes Mohammad Captures the Challenges of Life after Combat

German-Egyptian sculptor Dr Gindi approaches her artistic practice through the themes of infinity and immortality. Initially trained in medicine and working as a physician for many years and across different cultures, she realized that death remains a taboo in society. With her art, Dr Gindi sets out to change the narrative about human decay.

“A key experience regarding death was when I worked in a hospital as a medical student, seeing people die in front of my eyes – the heart suddenly stopped beating. I realized that death could not be the end of life but rather the assumption of a different dimension,” Dr Gindi explains. “Embracing grief and preparing for infinity impacts our whole life. Living is nothing but a rehearsal of our waning, consciously and sensuously. Set into nature’s cycle. In thinking about decay and venerating infinity, we are contemplating about ourselves – and we live on, in a rather non-scientific, non-Cartesian manner.”

Dr Gindi on her work The Last Second: “With time everything dissolves for the protagonist in that oeuvre, a character in his last moments of life. He is about to leave his corps without having anything anymore. But does really nothing matter to him, in that very second? Is there perhaps resurging desire, invincible faith, vaporous illusion? In the last surge from the world of weight, that character might enter a rather serene espousal of that unbound glint. His beclouding and his becoming coincide.”

Dr Gindi questions the dualism of mind and body according to 17th century French philosopher and mathematician René Descartes, who accounts as a father of modern philosophy. He introduced rationalism and the mind-body problem, postulating that they are two separated entities rather than two halves of the same whole. He saw the body as a machine that could exist without the influence of the mind. “Descartes considered anything to be true that is clear and distinct,” the artist explains. “Nature, in his eyes, atrophies into a set of rational and desiccated formulas. As the only rational beings, he saw us, humans, as superior to nature. I passionately disagree – we cannot subjugate nature as we are part of it. And I consider nature as something much bigger, as something celestial and all-knowing. Nature is the seed into infinity.”

A representative of the artist’s non-Cartesian concept and the infinity of nature is the sculpture “The Horticulturist.” Dr Gindi portrays an enlightened naturalist who has committed his whole life to the pureness of plants. “He becomes one with his objects of love. Is he still a human or already transforming into a plant? The Horticulturist is not an illustration of nature. He is nature”, she describes.

Dr Gindi on The Horticulturist: “A gardener is germinating his infinite self. Prolific seeds of ardour he planted that should by now be grown. Indeciduous roses warm his field of bones. ‘I bloom just for you’, he says.”

Dr Gindi translates the experiences, observations, emotions, and reflections about infinity into poetic semi-figurative bronze sculptures. Despite receiving a formal education in classic sculpting at the renowned Florence Academy of Art, Dr Gindi soon challenged traditional techniques and mainstream abstraction. In the beginning, she drew inspiration from the realism of 19th Century France. Especially the work of female sculptor Camille Claudel intrigued her. Throughout her turbulent and tragic life, contemporaries overlooked Claudel’s artistic genius and saw her mainly as the right hand of her mentor and lover, the father of modern sculpture, Auguste Rodin.

Although looking for inspiration in French realism, Dr Gindi knew there was neither a need for role models nor rules in art. To find her unique artistic voice, she approaches every new work with pragmatism and naivety, letting the intuitive part of her mind guide the way. Unseen forms emerge organically from the clay during the creative process. The sculptures develop a life of their own.

A critical part of her artistic practice is also her unconventional approach towards the material clay. “In formal training, clay is mostly considered as a means to justify the end product, the cast sculpture,” Dr Gindi explains. “Conversely, I believe that the clay is living on after it is cast into bronze. The clay itself is a breathing organism. It is material and possesses materiality – an earthy matter with an eternal lifespan containing the remains of dead plants, animals, and microbes. It is like nature is celebrating its rebirth in my sculptures. Clay has been used by sculptors from ancient civilizations as a symbol of fertility and infinity. I consciously use clay to illustrate my connection with nature and – concurrently – to overcome once again the Cartesian dualism between object and subject, body and mind, that has permeated the arts since René Descartes’ cogito ergo sum (I think. Therefore I am) and its implicit denial of aesthetics.”

Jason deCaires Taylor: “I want to highlight aquatic places in all their diversity”

Dr Gindi received classical training as a sculptor to approach humanness, infinity, and immortality in an empathetic and profound way. Her most recent sculptures are made of clay and later transformed into bronze.

Descartes put little meaning on “the aesthetic experience.” He was suspicious of everything that involved the senses, emotions, and the imagination, everything threatening the rational. He even begins his Third Meditation with the words: “I will now shut my eyes, block my ears, cut off all my senses. I will regard all my mental images of bodily things as empty, false and worthless …. I will … examine myself more deeply, and try … to know myself more intimately. I am a thing that thinks…”

Dr Gindi instead approaches beauty with all her senses. “It is such a satisfaction to feel the texture of something, to smell the ingredients of something. And to quest after the inception and the beauty of something,” the sculptor explains. “For all that, I am not sure if my work can be considered to be prepossessing or even simply aesthetic. Still, for sure, I want to see my sculptural language leading to artifacts that are truly compassionate. In my humble opinion, the purpose of art is to express beauty, but it also needs to elicit emotion – and purpose. How something appears has no beauty per se. How it vibrates, sprouts, lives is veritable beauty, though – an experience that eclipses the edges of the purely aesthetic. We are all a part of nature.”

Dr Gindi’s sculpture “The Fateful Choice” has been selected for the “The Figurativas,” a competition organized by The Fundació Privada de les Arts i els Artiste. The Foundation seeks to promote and diffuse Figurative Art, and its chief mission will be to encourage artistic initiatives and sponsor artists. The exhibition accompanying the competition and showcasing the works of all finalists including Dr Gindi is on display from October to January 22 at the European Museum of Modern Art in Barcelona.