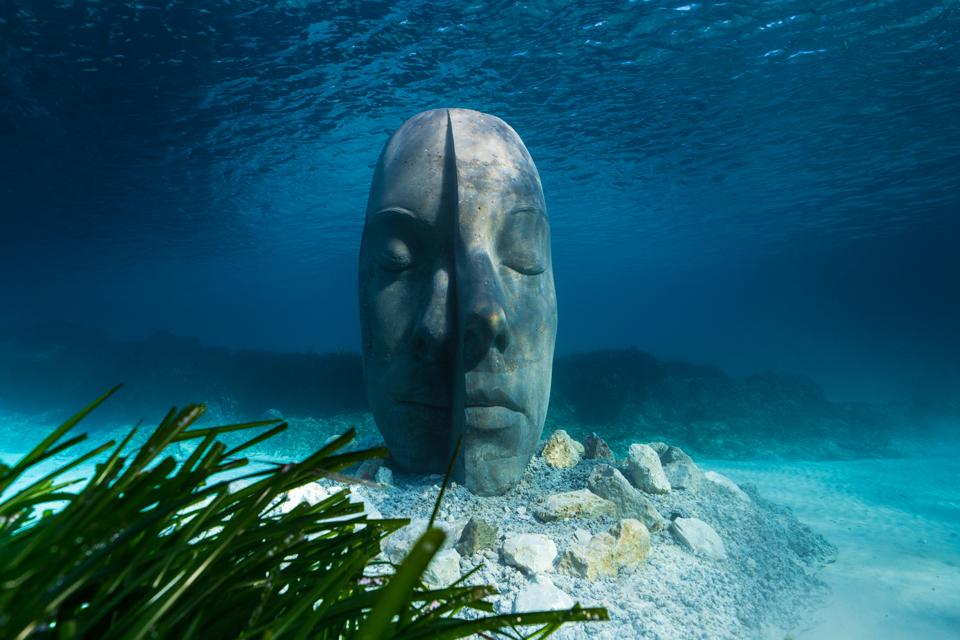 Since 2006, British artist and conservationist Jason deCaires Taylor has been sinking hundreds of sculptures in oceans worldwide. With time they transform into living reefs full of marine wildlife. In this interview, deCaires Taylor recalls some of his favorite underwater moments and speaks about engaging new ambassadors for the sea.

What do you most enjoy about working with the ocean?

Jason deCaires Taylor: What intrigues me the most are all the different environments and sensations you get in every place. Each location has its unique characteristics. Being underwater, for me, feels as if reality is suspended. The normal rules of logic and reason don’t apply anymore, and you go into this new universe. It feels as if you’re less conscious of your body and more aware of your mind. One of the most important aspects I enjoy is the documentation of how the sculptures evolve and grow. I invest a lot of time and money in photography equipment and different techniques. It’s almost like an underwater studio. Now I have tripods, lighting assistance, and it can be quite an operation to take the pictures.

Is there a special underwater place or experience you still remember vividly?

Jason deCaires Taylor: One of the best experiences I’ve had was in Norway, being in this cold, dark, and murky fjord. When I dived into it, there were leaves floating around, and when I looked up to the surface, they turned the water gold. There was all this gold light filtering down, like layers of mist. And then there were the sculptures appearing through these levels. And all around me, there was this incredible marine wildlife.

What kind of animals did you see?

Jason deCaires Taylor: I could see clear tubular structures of sea squirts. They are filter-feeding organisms, so they even can help to improve the water quality. And then there were all these different types of mussels and barnacles and banded shrimps. Seagulls were diving underwater, eating some of the barnacles. The fish attracted seals surrounding the installation. And all this biodiversity in an urban environment, in the middle of Oslo. There is this sub-aquatic rain forest under everybody’s noses, but nobody is aware of it. Instead, people threw barrels of mercury in it or dumped cars. It was heavily polluted. But it still harbored all this incredible life. It felt like Alice in Wonderland, where you look through the rabbit hole, and all of a sudden, you encounter this wondrous world. I’m always fascinated by nature’s resilience. I’ve made installations I never thought would grow or much would happen with them. And the amount of life that colonized the sculptures in such a short amount of time was incredible to see.

Where was that? Can you name an example?

Jason deCaires Taylor: The Museo Atlántico off the coast of Lanzarote surprised me. I wasn’t expecting any significant, colorful changes that you would get in tropical areas. I installed all the sculptures, and two days later, worms and algae had already covered them. I couldn’t believe how quickly it started. We did some surveys on the increase in biodiversity, which was much bigger than in some tropical areas. That was incredible to see. What I also found astonishing were all these unique shades of blue in the Atlantic Ocean. It was a much deeper, intense, kind of cobalt blue. And it gave everything a different feeling to it, almost dreamlike. It seems as if the edges of everything are erased, creating a surreal atmosphere where everything merges as a whole.

“I wasn’t expecting any significant, colorful changes that you would get in tropical areas. I installed the sculptures, and two days later, worms and algae had already covered them.”

You try to recreate these shades of blue and sculptures also in your studio. How do you do that?

Jason deCaires Taylor: I’m always experimenting. I have a series of tanks in the studio, and I grow sculptures in different sizes in them. I use various types of metal pagination to try and achieve some of the blues that I’ve seen in nature. It’s important to mention that none of these works will ever go into the sea. It’s only for land exhibitions that I’ve tried to recreate these experiences. People are interested in collecting some of the work, and as I never take anything out of the sea that is living, I tried to replicate that process with small-scale maquette sculptures.

How does this process exactly work?

Jason deCaires Taylor: I dissolve copper in copper sulfate. Through a chemical reaction and electricity, the metal dissolves and then starts accumulating on the sculpture. It’s very similar to how a reef evolves because corals draw calcium out of the water to build their structure. So the staining filters the copper out of the water instead. I can control a little bit in which way it’s going to grow. But a lot of it is entirely random. Some of it will change fast one day and in a weird formation. The next day, nothing will happen.

Interestingly, you cannot make this by hand because it’s such a complex structure. You can’t shape a coral because it has so many tricky bits inside it. So for me as a sculptor, it’s fascinating being able to grow instead of molding the pieces.

Your most recent work is the underwater museum of Cannes. How did you approach the project?

Jason deCaires Taylor: Over the years, I’ve done many projects in the Caribbean and the Pacific Ocean, so working in the Mediterranean Sea was interesting as it was my first foray into this area. The sculptures are easily accessible and close to the shore right off the island Sainte-Marguerite at the French Riviera. Some of the six pieces lie only one meter below the surface. So you don’t need to dive to come and see them. Anybody can snorkel around them. The sculptures represent masks referring to the Île Sainte-Marguerite’s history, known as the place where the Man with the Iron Mask was imprisoned. It’s also a metaphor for the ocean. One side of the mask represents strength and resilience, the other fragility and decay. From land, we see the surface, calm and serene, or powerful and majestic. This is the view of the mask of the sea. However, below the surface is a fragile, finely-balanced ecosystem.

“One side of the mask represents strength and resilience, the other fragility and decay.”

You just mentioned that it was interesting to work in the Mediterranean for the first time. In which way?

Jason deCaires Taylor: If we think of underwater places, we often have these colorful coral reefs, dolphins, whales, and sharks before our inner eye. I want to highlight aquatic spaces in all their diversity, and in the Mediterranean Sea, you encounter large seagrass meadows called Posidonia Oceanica. These plants are equally important as coral reefs. They are the habitat of much different marine wildlife, produce oxygen, and absorb carbon. They play a crucial role in the equilibrium of coastal ecosystems. Pollution has contributed to their decline, and often anchors get dropped on them, damaging the leaves and roots. That was also the case with the site where we planned the underwater museum. Before installing the sculptures, we had to clean the area from old engines and pipelines.

Many of your underwater sculptures are portraits of local people, also the sculptures in Cannes. Why?

Sculptor Dr Gindi: “We Are All Part of Nature”

Jason deCaires Taylor: I like the idea of including people who feel connected to the place and the work. I hope it creates new ambassadors for the coastlines and the seas. It’s about initiating some guardianship and dialog to engage people. In the end, it’s the community that can drive change.

How do you approach the models?

Jason deCaires Taylor: Sometimes I place an ad in the local newspaper or advertise on social media, but I also do street castings and approach people with interesting characteristics directly. Most of them are very skeptical at first. They think there is some hidden agenda, and they are very dubious. That’s why I used to carry around a little portfolio of my sculptures to show it to them. At first, it might seem a bit bizarre, but then most people are happy to be included and even humbled by the experience.

“In the end, we are all emotional beings, and it’s difficult not to be paralyzed by all the problems but to be motivated by them. However, I feel that people can be empowered much more by hope than by fear.”

“I think we need to be emotionally convinced by things. And that’s where art plays a critical role.”

How do they react when they see the finished sculpture of themselves sink in the sea?

Jason deCaires Taylor: For example, one sculpture in Cannes is Maurice, an 80-year-old local fisherman who was very conscious that this was his legacy for his family after he’s gone. And some of the younger models, they’re pretty interested in being more involved in marine conservation. One of them is Anouk, a 9-year-old primary school pupil looking into becoming a marine biologist. After seeing the sculpture submerged and realizing how it changes and grows, she told me that she would like to monitor how it evolves and determine what species live on it. From that, she started to get interested in marine biology and conservation. That was nice.

A biology class probably wouldn’t have had the same effect.

Jason deCaires Taylor: I think we need to be emotionally convinced by things. And that’s where art plays a critical role. It’s about having science at your fingertips but also considering a more holistic approach through storytelling. In the end, we are all emotional beings, and it’s difficult not to be paralyzed by all the problems but to be motivated by them. However, I feel that people can be empowered much more by hope than by fear.

A significant obstacle is that our coping mechanism as humans is denial, and we somehow need to try to disband that sort of response to take action. Especially now, during the pandemic, we are all living in a slight sense of trauma. So we can recoil and become more scared and insular and more protectionist, or we can realize how fragile as a species we actually are and hopefully address that proactively. I don’t want to downplay all the incredible pain and grief many people are going through right now, but great tragedy has brought some positive things when you look at history. After the Second World War, the United Nations was set up, and the Paris peace treaties. People were humbled into valuing what they had, and hopefully, we will foster that humility even more in the future.

This interview has been edited and condensed for clarity.

William Trubridge: “Freediving is the only true definition of human aquatic potential”

Tracy Edwards: “The North Atlantic is my favorite ocean. It’s like a gangly puppy”

Sleeping Giants: A Dive into the Wondrous World of Whales