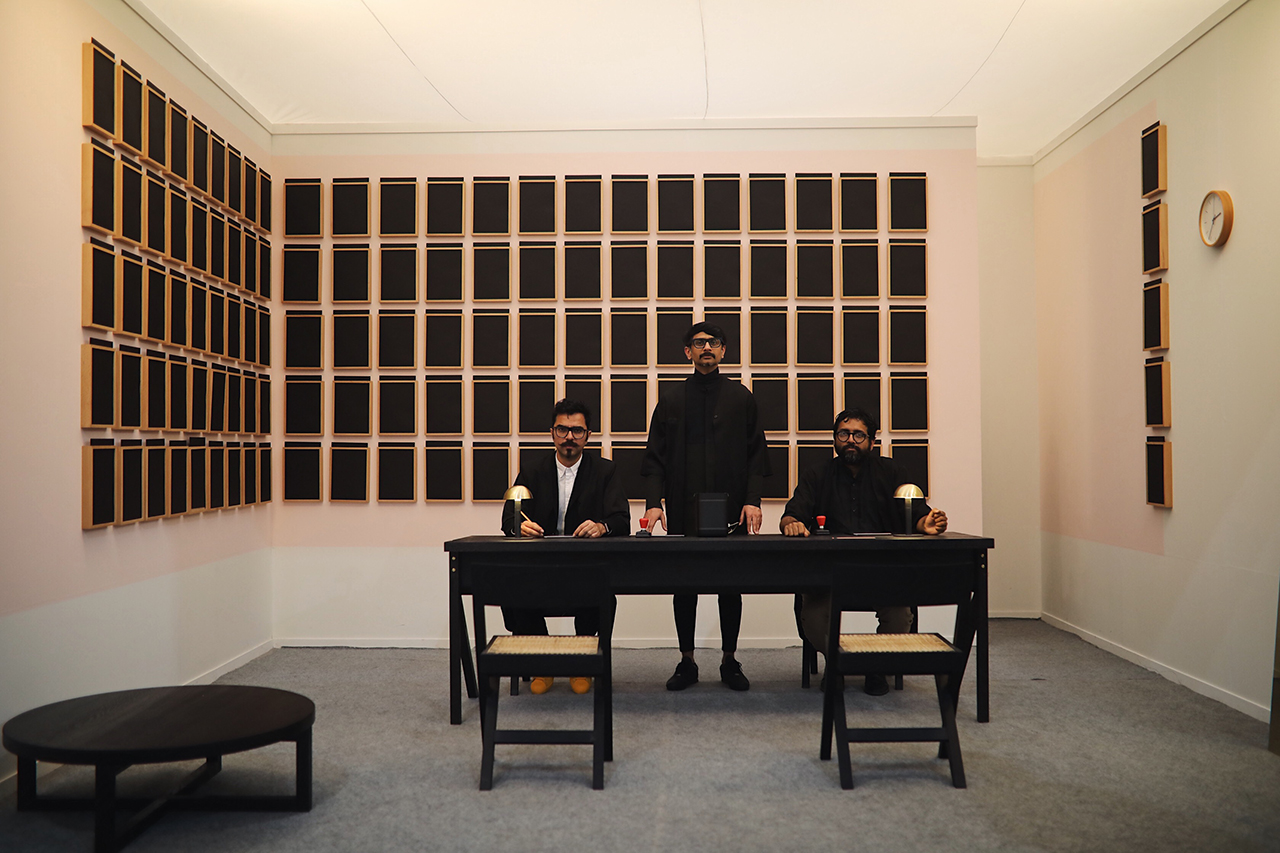 In part 2 two of our new interview series “Checking In,” the multidisciplinary artist duo Jiten Thukral and Sumir Tagra from New Delhi share their thoughts on the corona crisis in their home country India. The two are among the most renowned contemporary artists coming out of South Asia. Their work is frequently auctioned at Sotheby’s, and the collector Frank Cohen and pop star Elton John own some of their pieces. Here Jiten and Sumir express their concerns about a humanitarian crisis unfolding in India and shine a light on the situation of the most vulnerable.

TYC: How would you describe the current situation in India?

Sumir Tagra: We are in a very serious lockdown since March 24, and it will last until May 17, at least. Here in India live more than 1 billion people, and there are only a small number of testing kits. That makes it very hard to tell how reliable the official numbers on the coronavirus are. Some sources estimate that the total numbers are three to four times higher. But somehow it seems, at least at the moment, that the pandemic appears to be a little less severe in Southeast Asia, but we still don’t know how it will progress in the future. There is a theory that assumes it could have to do with a vaccine we get called BCG (Bacillus Calmette-Guérin), which protects against tuberculosis. In a lot of Southeast Asian countries, this a routine vaccination due to the hot climate and hygiene issues. Advocates of BCG believe that the vaccine makes people less prone to the coronavirus.

How likely is this assumption?

Sumir Tagra: It’s important to emphasize that it’s not a proven hypothesis. The WHO is examining it and does research, but until now, there is no reliable evidence. At the moment, the only way to control the pandemic is to cripple the economy through a lockdown, which has severe consequences for the poor who are the most vulnerable in this situation. Especially in big cities, the density of people is very high. An outbreak in the poorer districts would lead to a collapse of the health care system and to a humanitarian crisis that could also have consequences for the rest of the world.

Speaking of the most vulnerable: In 2019, you presented an artwork called “Farmer Is A Wrestler,” in which you tackle the precarious positions of the rural communities in India. They suffer from the consequences of the lockdown the most. Can you tell us more about their situation and the artwork?

Sumir Tagra: “Farmer Is A Wrestler” was an exhibition and our response to the agrarian crisis. Over decades farmers in India have been facing a lot of challenges and injustice like generational divisions of land, climate change, vote-bank politics, a lack of implementation of the law, and the general deficit of formal education, as the majority of them are illiterates. Over 200.000 farmers have committed suicide in India since 1997 because of poverty, debt, and an extreme rise in costs and crop failures due to pest attacks. To symbolize their physical and mental struggle, endurance, and resilience, we used kushti, a form of traditional Indian wrestling that is popular amongst rural communities. The exhibition Farmer Is A Wrestler invited the visitor to follow a range of movements in the framework of an interactive game to understand the situation of the farmers better.

Where do you see the most significant challenges for rural India during the corona pandemic?

Sumir Tagra: At this stage, we are in a very critical situation where we might have food shortages that could also result in riots by the end of next month. The lockdown hurts the farmers massively. 60 to 70% of the people in India are directly or indirectly part of the agrarian sector. Those are going to get massively hit. Right now, from April to June, is India’s harvest season. It’s also when farmers start sowing the summer rain-fed crop. But right now, due to the disruptions of the supply chains, it’s tough for them to sustain.

What measures does the government take to ease the pressure on the farm community?

Jiten Thukral: Just recently, they allowed farmers to proceed with the harvest, but there is only a limited number of combiners in India, so the farmers depend on the help of migrant workers. When the lockdown started, they went back to their home villages or got stranded in camps as they were not able to return to their communities. Also, the whole agrarian infrastructure is disrupted, so the farmers cannot sell their products as there are no traders, no truck drivers. Closed borders also lead to blockades in the transport of commodities. Dairy farmers have to throw away their milk as they don’t know how to sell it. Restaurants, school canteens, offices and food stalls are closed, so there is no demand for their products.

How are the conditions in the migrant camps?

Sumir Tagra: The migrant workers have been treated like animals by the authorities. They are illiterate and don’t understand the news, which makes it even harder for them to stay informed on the coronavirus situation and claim their rights. They are living hand-to-mouth and don’t have any savings or official working contracts. As daily wagers, they form part of the informal economy. Now they rely on the food rations of the government. To prevent famines, India has food stocked in warehouses. So right now, the statistics came in, which shows that we have 9 million tons of food reserves. But the government can’t reach out to everyone, as there is just no logistical infrastructure.

Also, the migrant worker is the primary breadwinner who travels hundreds of miles from his hometown in northeastern India to come down to, for example, Bombay to work. He sends money back to his family. He earns about $5 to $8 a day. So, their families now also suffer the consequences of the lockdown. And of course, social distancing is not all possible in these camps. In India, quarantine is only for privileged people, and these don’t form the majority of the Indian population.

Migrant workers are left behind and have to cope with the crisis on their own.

Jiten Thukral: The government just doesn’t consider their situation. They just recently introduced tax deduction or the extension of the renting systems. But that doesn’t help the migrant workers because they don’t even have a taxpayer number. These measures have nothing to do with their reality of life. The government gives the workers 500 rupees for a month, which is like $7, so they can sustain themselves, but that’s pretty much it.

You have a strong approach to social challenges in your art and tackle them by using interactive game design. What is your motivation behind that?

Sumir Tagra: We both come from middle-class families in the Punjab state, which is the breadbasket of India. We have a lot of family history, which is very relatable and similar to theirs. Professionally, we come from a mixed educational background between Fine Arts and Design, which means that we have an urge to tackle problems. And we focus strongly on combining social design and game design. It can become an essential component of how you step by step, open up and peel off the information. So rather than asking a person to read a book about the situation of farmers in India, we develop a mechanism or a game to make the complexity of social issues more interactive and relatable.

Can you tell us how your situation in lockdown looks like at the moment?

Sumir Tagra: As practicing artists, we’ve been pretty lucky because we both live in a broader gated neighborhood. We have our studio within the community, so we can walk down the street to work. It’s like a little comfort area where we both can get out of our families, exchange ideas, and create some work. Before coming to the studio, we precautionary quarantined for 14 days at home, and then we took turns coming to the studio. But now we are almost every day here together.

Are you currently working on something related to the current situation?

Sumir Tagra: We launched a project called Pollinator, which serves as an interdisciplinary lab. It tackles social change on a discourse and research level and has a more educational approach. It is also offering experimental workshops. In the framework of Pollinator, we recently developed a game called Solitude, which can be played in confined spaces. It consists of little exercises one can do at home, which we then illustrate to put them up on Instagram. It’s a humorous take on how to journey the world within your head when you are confined at home. While building the project we came across this book called “Journey Round My Room,” by Xavier de Maistre from the18th Century. It was excellent to witness similar situations back in the 18th century as one can understand the relevance of coping mechanisms in current situations as well.

To what extent is your work affected by the coronavirus?

Jiten Thukral: We had four exhibitions planned this year: in Hong Kong, Abu Dhabi, Dubai, and Jordan. Three of them got canceled; only Dubai got postponed. So maybe next year we can have exhibitions again, but of course, we have no idea. As artists in India, it’s not that easy to sustain. No joint parties are helping the art scene because, especially in times like these, art isn’t a priority.

There is no support at all?

Jiten Thukral: Not from the government, all initiatives are private. It comes down to artists and the so-called cultural union, which is the general art world, whatever that may mean here in India. It’s very limited at the same time in comparison to any international scenario. Why? Because we don’t have an arts council, we don’t have public funding for any type of contemporary art. Whatever we land up doing is because of our sales, or individual patrons and gallery exhibitions.