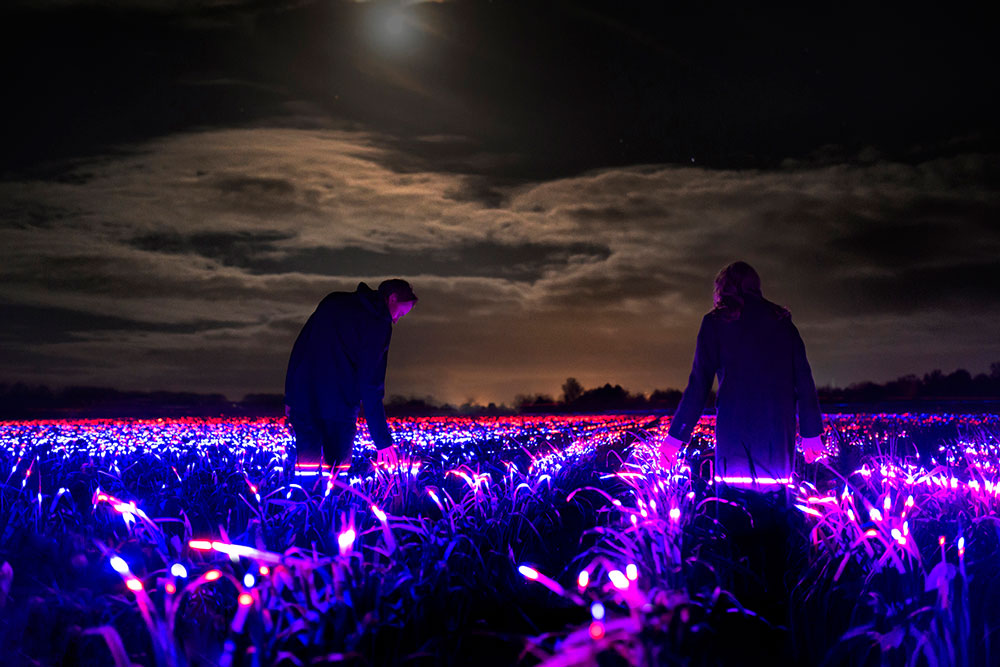 The Art of Walking in Iceland’s Wild Westfjords

The latest light installation by Dutch artist-designer Daan Roosegaarde turns a 20,000 square-meter leek field into a luminous dreamscape of red and blue light. It’s a tribute to the farmers cultivating the fields while also inspiring us to imagine a more sustainable future.

“I’m a city boy, and like many people, I’m very disconnected from the food I eat and the realities the farmers are facing every day,” the designer tells The Y Circus. “It’s easy to judge and condemn agriculture as unsustainable when one knows only very little about it. The farmers who get up every morning at 5 am to tend the land are taking many financial risks. And they also see the need for change. In the end, we are all part of the same ecosystem.”

For the installation, Roosegaarde drew inspiration from scientific light recipes that improve plant growth. He and his team of engineers and designers collaborated closely with scientists from Wageningen University & Research as well as experts from the World Economic Forum Davos. Studies have shown that UV light can protect crops from damage. For example, it can help against powdery mildew, which often ruins entire crops. Scientists investigate different wavelengths, light recipes, and cultivar responses to UV. According to Prof. Dr. Wargent, Ph.D., Chief Science Officer at BioLumic, and a leading expert in plant photobiology, scientific research shows that specific light recipes can enhance growth and reduce pesticide use up to 50%.

“There is so much knowledge hidden in universities, and we need to activate that information and make it accessible and approachable to the public,” says Roosegaarde. “Here is where art can help to inspire, and at the same time make something that works and contributes to speeding up certain technologies or principles of science. That really fascinates me personally, so there is a sort of common ground, an overlap between art and science, even if it might only be about 30 to 40 %, together the two disciplines can make an impact. It helps if you have people who are open-minded and interested in hybrid thinking. A linear I’m-always-right-approach will not be enough to handle the global challenges we are facing. There is not a lack of money or technology in the world, but of imagination. If we can’t picture how we want our future to look like, it’s hard to create it, so everything starts with an idea, and science and technology are great tools to turn them into reality.”

“There is not a lack of money or technology in the world, but of imagination” – Daan Roosegaarde

Since 2007 Rotterdam-based Studio Roosegaarde has examined the relationship between people, technology, and space using light as a language. From an early age, the 41-year-old innovator has been fascinated by bioluminescence from living organisms like fireflies and jellyfish, an inspiration that Roosegaarde translated into some of his most innovative designs such as Van Gogh Path, Gates of Light, and Waterlicht. “When we look at the stars in the sky, light is not decoration. It’s communication and information moving towards us at thousands of kilometers per second. It seems like a kind of morse code that maybe one day we will decipher. Light as a medium in art is also communication and a great way to create interactions. It triggers the more emotional and intuitive side of people. You create a notion of openness for change and acceptance. It seems we live in a state of denial, we all know the sea levels are rising, but are still building condos on Miami Beach. So apparently, we need a different way of visualizing and accepting change. I think that’s what these projects are about.”

In December 2020, the studio also announced the project “Urban Sun” that poses the question: “Can we use the power of light to bring back our well-being?” Inspired by science, Urban Sun uses a proven wavelength of light that cleans spaces of airborne particles safely, including the coronavirus. “I think it’s so important to find a way to meet again and use science and design to improve the world around us. We are the architects of our new normal,” Roosegaarde states in the project’s trailer.

“Nature has had billions of years of research and development with unlimited resources and budgets, an abundance of everything”

For Daan Roosegaarde, there is no more fascinating source of inspiration than nature’s technology. In 2017, the studio launched “Glowing Nature,” an interactive art installation that consists of 700 million-year-old microorganisms grown in ideal conditions to make the most light-emitting algae in the world. The microorganisms light up upon touch enabling the visitors to directly experience and interact with nature and technology. “Nature has had billions of years of research and development with unlimited resources and budgets, an abundance of everything,” says Roosegaarde. “The smart city of the future will include principles from nature rather than microchips or sensors. There is a renaissance of learning from nature, and clean air, water, and energy are the most important values of the future.”