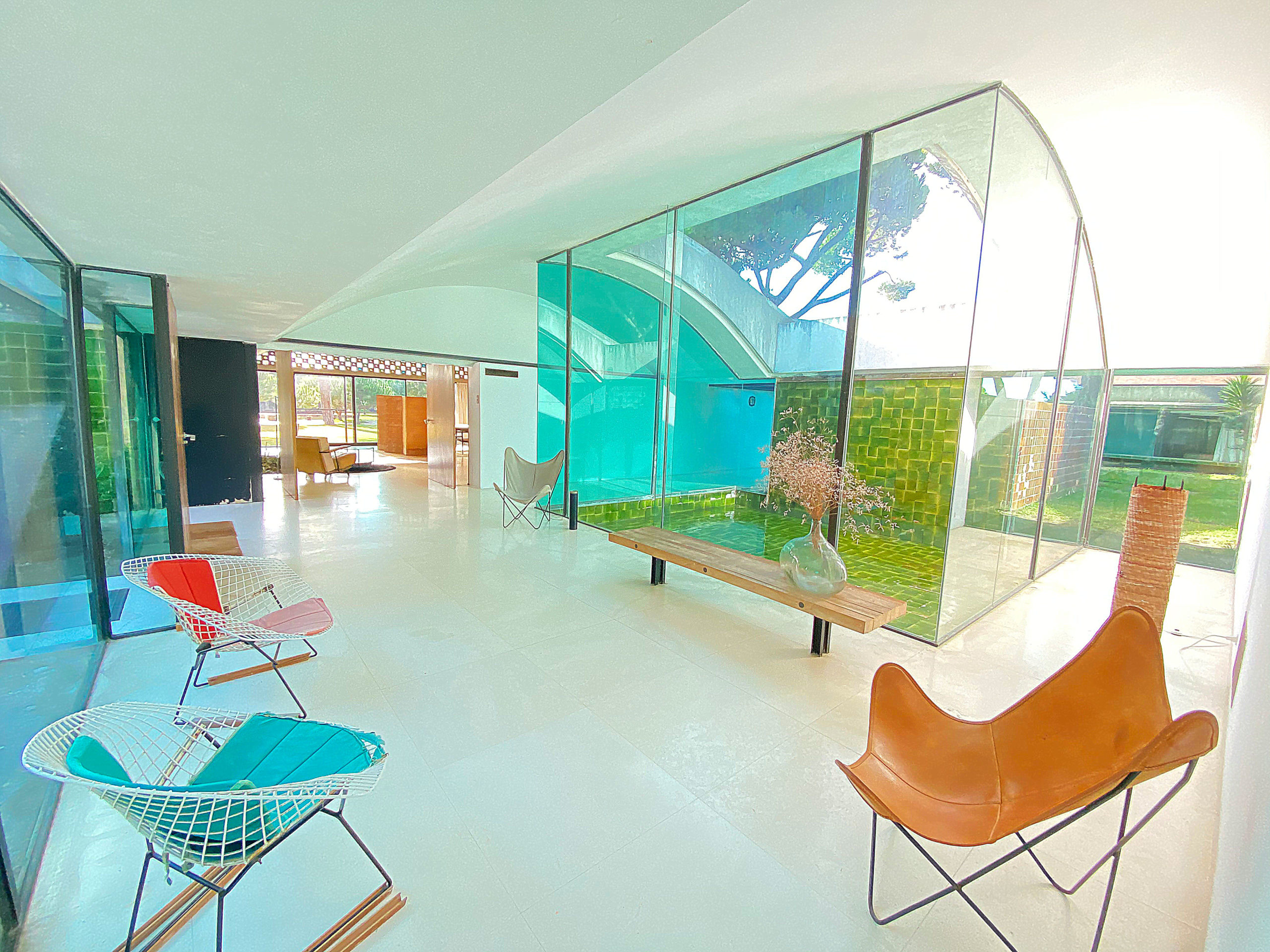 Casa Gomis, designed by the Catalan architect Antonio Bonet, is a testament to Spain’s rationalist architecture, but it faces an uncertain future.

Marita Gomis Bertrand is standing together with a small group of visitors in a pine forest by the Mediterranean sea, 13 miles outside Barcelona. This Saturday morning in January, they have come here to learn about an unusual house, a house with glazed brown and green ceramic facades and an extensive curved roof hidden under the pines’ branches. Every few minutes, a metallic thunder interrupts the tranquil landscape. The noise comes from the planes starting and landing at the Barcelona Airport situated only 400 hundred meters away from the property. “In my childhood, the airport was still a small field, used only by propeller planes, and we would ride our bikes on the runways,” remembers Marita, 72, while showing the group around the grounds. “Over the past decades, it has grown continuously.”

Together with her five siblings, Marita grew up with the house, which their parents, Ricardo Gomis and Ines Gomis Bertrand, commissioned in 1949. They contracted the Spanish architect Antonio Bonet Castellana. He started his career as a disciple of Le Corbusier and José Luis Sert before moving to exile in Argentina.

The couple’s goal was not only to create a summer and weekend home, but a place of encounter with doors always open, welcoming family, friends, and friends of friends. Building the house turned into a creative adventure that took from 1953 to 1963, realized in remote correspondence between Barcelona and Buenos Aires, where Bonet resided. The only mediums of communication were letters and photographs. “”Each document read as a manual with instructions to proceed with the construction of a house that was very different from all the other ones in Spain,” says Marita.

Every Sunday, the family would visit the construction site. “We wanted to help the workers and lay bricks, but our parents didn’tdidn’t let us. However, we watered the pine trees, packed the sand, and did other smaller tasks we were allowed to as children,” remembers Marita. Over the years, the siblings had seen the house evolve into their family home without knowing that one day it would be a reference of rationalist architecture in Spain, emphasizing form and clean lines over ornaments.

Marita and her siblings called it “The New House.” Today, it’s almost 60 years old and called many different names: The most popular ones are “Casa Gomis” and “La Ricarda.” “The name refers to a lagoon called La Ricarda, which was located close to the house in the former delta of the Llobregat River, along the Mediterranean Sea,” explains Marita.

La Ricarda, planned down to the millimeter, is a piece of precise geometry and, at the same time, surprisingly unconventional. The basis is a flat platform that rises one meter above the natural terrain and acts as a pedestal to protect the house from the sea. Underneath it, Bonet integrated a grid structure in the ground consisting of connected pillars and beams in which four thin steel piles support a floating, undulating roof. They built it in the traditional style called “Vuelta Catalana” (Catalan vault), a technique that only a few artisans still practice today. The roof, made of ceramic tiles and concrete, is structured into 12 modules that define the living spaces.

Bonet planned an independent pavilion for the parents, featuring a bedroom, bathroom, and a lounge area with a wide window front that opened up to the garden, where nothing would distract from the tall pine trees Marita’sMarita’s grandfather had planted here over 100 years ago to stabilize the dunes. “From the correspondence, we know that my parents and Antonio Bonet discussed where best to position the house so that no pines had to be felled,” Marita says. The pavilion connects with the main house only through a glass hallway. The use of glass is a characteristic element of La Ricarda and symbolizes the connection between outside and inside. It’sIt’s a thoughtful relationship between the landscape and the building where interior space best complements the surrounding natural environment. The house is thought of as an open space that mirrored the Gomis Bertrand Family’s mentality.

La Ricarda enabled Bonet to reconnect with his home Catalonia, which he left in his twenties, to pursue a career with Le Corbusier in Paris. He met the Swiss-French architect at the age of 20 in 1933. Bonet was the only student invited to the ship Patris II, which had the most prominent architects on board to attend the IV Congress of Modern Architecture (CIAM) in Greece. After several discussions on the high sea, Le Corbusier offered Bonet to work with him in Paris. In Le Corbusier’sCorbusier’s studio, he became friends with the Argentinian architects Jorge Ferrari Hardoy and Kurchan. When Bonet realized that he had to leave Paris due to the arrival of the Nazis, he embarked on a ship to Buenos Aires, where Hardoy and Kurchan welcomed him. Together the three architects designed the butterfly chair in 1938.

They had to come up with an idea to furnish the interior of an apartment building in Buenos Aires and drew inspiration from a folding-style chair used by the military called the Tripolina, which they liked for its simplicity and portability. The butterfly chair got a lot of attention from the media, and Edgar Kaufmann Jr, one of the directors of MoMA, bought two of them, from which one forms part of the museum’s permanent collection. The other one resides in his UNESCO heritage home Fallingwater, located in the mountains of Southwestern Pennsylvania and designed by Frank Lloyd Wright.

The butterfly chairs are also a permanent feature of Casa Gomis. Two of them were placed in the entrance hall, a tinted glass cubicle with a wall fountain made of glazed green ceramic tiles. “Bonet designed not only the house itself but also the furniture and everyday objects, from the door handle to the bathroom fittings.” Marita’s parents and Bonet shared the love for avant-garde design in which the functional and the aesthetic form two halves of the same whole.

Building Towards a Better Future

Casa Gomis’s highlight is the spacious living room, which served as a mini-concert hall thanks to its exceptional acoustic. Ricardo Gomis was an engineer by profession and a great music lover who was open to all kinds of genres, from classic to rock, jazz, pop, or folk music. “My father wanted Casa Gomis to be a venue for concerts and cultural events of all kinds. He would often sit here and listen to music until late at night,” Marita remembers. Ricardo Gomis owned state-of-the-art sound equipment with enormous loudspeakers. Bonet, who his daughter Victoria Bonet describes as an aesthete who couldn’t stand anything ugly, ought to have said: “Ricardo, this loudspeaker is as big as a piece of furniture. It blocks the view and breaks the lines of sight.” And Ricardo Gomis would reply: “For once, music wins out over architecture.”

Gomis was a member of the groups ADLAN (Amics de l’Art Nou/ Friends of New Arts) and Club 49, a collective that organized concerts, theatre plays, and art exhibitions to revive the Spanish avant-garde movement. He used the living room as a venue to promote and support the avant-garde artists during the last 15 years of the Franco dictatorship, a time when cultural life in Spain barely existed. That’s how Casa Gomis became a refuge for artists and intellectuals during the 1960s.

Fostering the cultural life in Spain was also how Ricardo Gomis met Antonio Bonet. Their mutual friend Joan Prats was involved in the avant-garde movements in the 1930s, and a close friend of the painter Joan Miró introduced the two men in 1949. At first, Gomis wanted José Luís Sert to build the house, who lived in exile in the United States, but he was not interested in doing any projects in Spain. “Joan Prats mentioned a young architect called Antonio Bonet Castellana who lived in Buenos Aires and who had collaborated with Sert in building the Spanish Republican pavilion for the International Exposition dedicated to Art and Technology in Modern Life in 1937”, says Marita. “My father and Bonet immediately got on very well. They shared the same values and ideas. Over the years, the working relationship between my parents and Bonet led to a friendship and a great mutual understanding.” La Ricarda is a testament to that friendship and mid-century Catalan modernist architecture.

Marita and her siblings are approaching the house’s future with uncertainty. They would love to see it become a cultural center or a museum open to everyone appreciating architecture and design. The family organizes guided tours to keep their parents’ legacy alive and uses the funds to maintain the house. But the renovation of Casa Gomis is an expensive endeavor due to its experimental structure and the rare building technique. The time and climate have left their marks, and the airport is getting closer and closer. If it continues to grow, it could be a threat to Casa Gomis.

The planes landing here bring thousands of visitors every day who appreciate Barcelona’s architecture. They come to see Antoni Gaudí’s Sagrada Familia, Parc Güell and La Pedrera. They are familiar with Frank Gehry’s Golden Fish Sculpture and enchanted by the Gothic quarter’s tiny alleys. Most visitors don’t know that only a few hundred meters away from the runway, hidden under pine trees, lies this gem of mid-century rationalist architecture, that has to be preserved.

The Tourist Information and Promotion Service of the Llobregat delta offers guided tours to Casa Gomis. To book, visit www.elprat.cat or send an email to info@portadeldelta.cat.