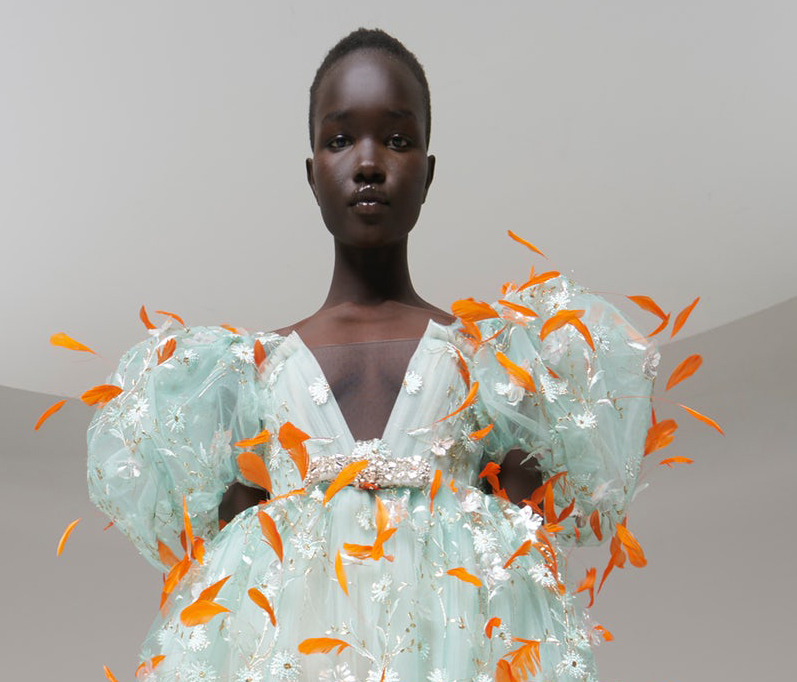 Casa Gomis: How a Family Home Became a Refuge for Barcelona’s Avantgarde in the 1960s

In the 19th century, when the Englishman Charles Frederick Worth came to Paris and invented haute couture, clothes were wearable status symbols reserved for royal clients and a small elite. Since then, haute couture has ever been synonymous with frivolity, decadence, and privilege. Only 4000 clients worldwide, the so-called “porte-monnaie sur pattes,” or “walking purses” can afford the luxurious gowns. In a 2016 interview with the British Telegraph, Karl Lagerfeld revealed: “These people make the rich look poor. If an American woman used to buy five couture dresses, she was a good customer. Today, one customer buys 20 dresses in five minutes.”

And every season the recurring question: Is haute couture in the era of streetwear still relevant?  If we think of haute couture as wearable pieces of art representing the highest quality of craftsmanship, it’s as frivolous as it is fantastic.

Another source of her inspiration was the hydrozoa, a delicate sea-life organism that alternates between a polyp and a medusa, floating in the oceans “like living lace.” Van Herpen’s wearable haute couture version of this sea creature features oil-painted cellular aquarelles of dark purples and turquoise that were multi-layered into hundreds of transparent laser-cut PetG bubbles. The glass organza halos were digitally printed, heat-bonded, and then hand-stitched into voluminous splashes. The file-work of each layer is drawn to hang upwards, blooming aquatically with each movement.

To host a haute couture exhibition at the Jeu de Paume in the Jardin des Tuileries open to the public instead of an invitation-only show is a welcome and zeitgeisty statement in the fashion industry. “Sometimes, the fashion world is too exclusive, and sometimes it’s nice to be inclusive,” said Giambattista Valli in an interview with Vogue. “So I think it’s good to be able to open this to people in Paris, to be able to share what is my idea of Italian beauty, and where I’m from – especially in a time like this.” His Italian source of inspiration are a reference to the colorful houses and gardens of the Amalfi coast reflected in voluminous silhouettes, bright pink, yellow and red hues, layers of tulle, taffeta, feathers, and ruffles. The coutier also drew inspiration from style icons of the 60s like Jackie Onassis and her younger sister Lee Radziwillart, as well as art collector Marella Agnelli. The fisheye angle pays tribute to the photographers Richard Avedon and Irving Penn.

Texas-born artistic director Daniel Roseberry has a penchant for the dramatic. His haute couture show featured evening gowns covered in crystals or embroidered with earrings and pearls, draped silk silhouettes, and a dramatic rainbow gown with a voluminous pink hoop skirt. Another standout was the surrealist jewelry inspired by the early designs by the French poet Jean Cocteau and the artist Alberto Giacometti, who contributed to Elsa Schiaparelli’s collections. The Spring/Summmer 2020 show was accompanied by dramatic classical music composed by Debbie Wiseman. On the other hand, Roseberry focused on daywear for New York’s art executives who would show off their love for the eccentric in a white pantsuit embroidered with earrings and pearls or a buff coat with the coruscating Schiap Sun King Lesage embroidery on the back.

Virginie Viard drew inspiration from Coco Chanel’s time in the convent school at the Cistercian Abbey of Aubazine in Corrèze, where she and her sisters were sent after the death of their mother. Viard translated Chanel’s metamorphosis from the auphern experiencing a strict upbringing to the master couturiers with sophisticated light silhouettes, and exact uniform dressing featuring a pinch of playfulness reflected in transparent details. The Schoolgirl looks were accompanied by chunky-heeled shoes and thick ankle socks. At the end of the show, Viard presented a wedding dress in crêpe georgette featuring a veil embroidered with branches of wisteria.

Jean-Paul Gaultier, who dedicated 50 years of his life to haute couture, bows out with an epic show at the Théâtre du Châtelet, featuring an all-star cast including Dita Von Teese, Rossy de Palma, Karen Elson, Farida Khelfa, Beatrice Dalle, Gigi and Bella Hadid, and Farida Khelfa, his former muse and couture director. Gaultier opened the fashion show with the funeral scene from the 1966 fashion film “Who Are You, Polly Maggoo?” underlined with the Amy Winehouse song “Back to Black” performed by Boy George.

Gaultier presented a cross-section of his career featuring signature designs like sailor tops, corsets, tuxedos, and trompe-l’oeil creations. The enfant terrible of fashion polarized and provoked with man-skirts in the 1980s and the use of unconventional models like older men and full-figured women, both pierced and heavily tattooed. “I feel very happy and emotional,” said Gaultier after the show. “There were a lot of old models that I had, that I love, that came specially for the show. To reunite with them brought up a lot of memories, but at the same time, we were making a new show, a new creation.”