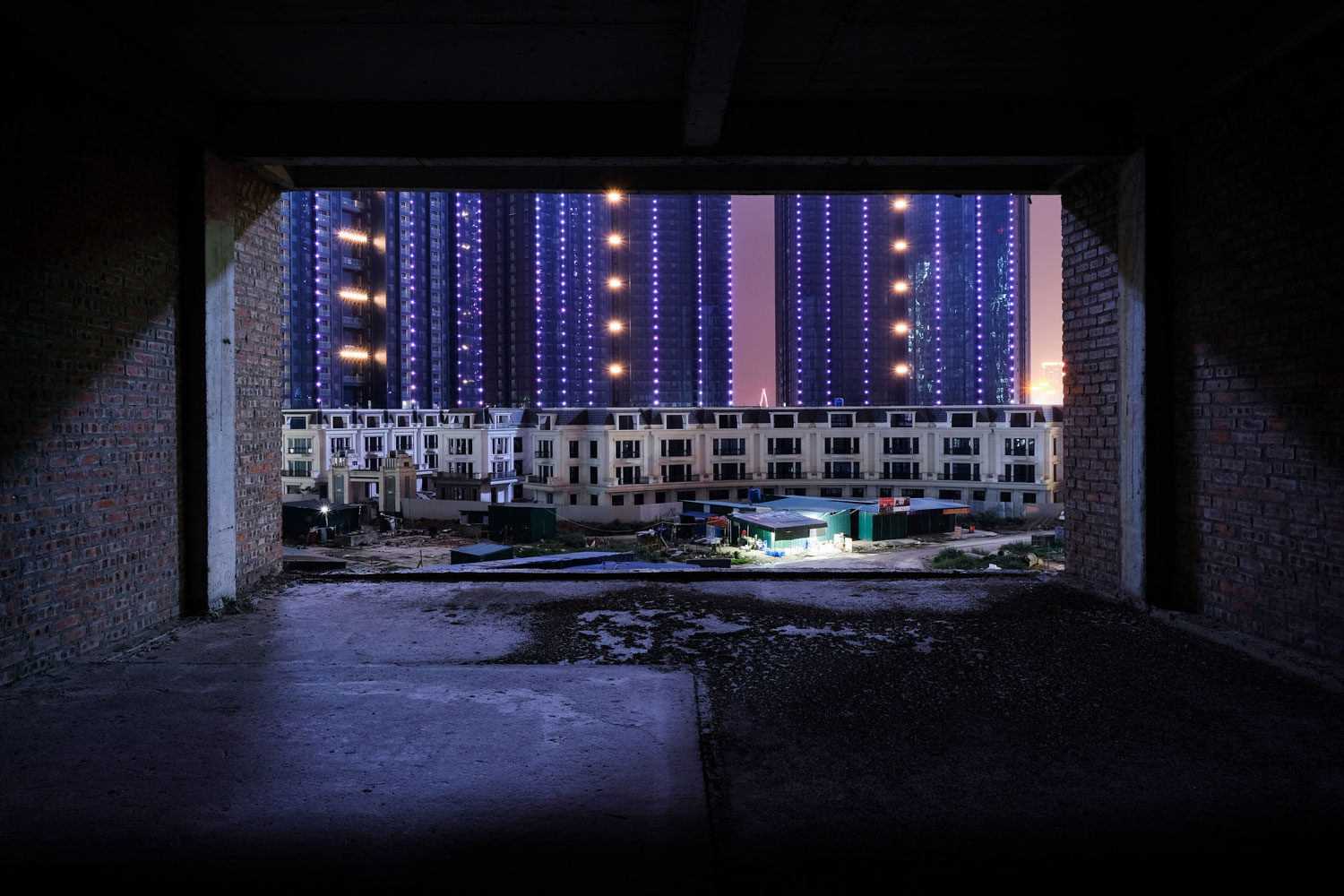 How to Live a Creative Life in the Corporate World

When the shadow of night settles over Hanoi’s rooftops, Belgian photographer Wouter Vanhees sets out on a nocturnal picture trip with his scooter. He visits residential areas on the outskirts, where new apartment complexes, shopping areas, and office spaces spiral into the sky. Modern urban areas intersect with traditional quarters, showing the contrast of past and future Hanoi.

This photo essay looks at Vietnam’s rapidly changing capital through the lens of a European migrant. Wouter Vanhees shares his impressions and observations and reflects on how he adjusted to Vietnamese culture.

“I moved to Hanoi in 2015 to work at the Embassy of Belgium as a trade and investment counselor of Flanders. The first time I visited the city was in 2007, as a tourist. What surprised me when I moved here eight years later was how much Hanoi had changed. It started along the way from the airport to the center: a new highway had been constructed, including a vast bridge over the famous Red River, cutting in half the travel time from the airport to the city.

“They say you come to Vietnam, and you understand a lot in a few minutes, but the rest has got to be lived.” This quote by English novelist Graham Greene resonated with me. Before I moved to Vietnam, I tried to prepare myself by reading up on the country and talking to foreigners who had lived in Vietnam or still resided there at the time. So I realized it was a place with a very different culture and ‘way of doing things’ than what I knew from Europe, but being in Hanoi and living in such a setting is an entirely different matter altogether.

“They say you come to Vietnam, and you understand a lot in a few minutes, but the rest has got to be lived.” – Graham Greene

“There is order in its chaos. There’s stillness in its noise. Somehow, it all falls into place.”

One of the first things I needed to adjust to was the different time concept: long-term planning isn’t very common in Vietnam. In Europe, I planned my professional meetings usually weeks, sometimes even months in advance. It’s very different in Vietnam, so I quickly learned to give up on that tight framework and be much more flexible. Now it sometimes even seems strange to me to plan things a long time in advance, so I suppose that’s a straightforward example of how I adapted to Vietnamese culture.

One enormous challenge for me here is communication. I’ve never been able to grasp the Vietnamese language, which is a big hurdle in communicating with people and understanding Vietnamese society’s underlying currents. I’ve always experienced it as my shortcoming, something that prevents me from digging deeper in Vietnam’s rich culture, but cutting myself some slack: it’s a challenging language to learn. The Vietnamese society is very relationship-based, much more than in Europe, which I also needed to adjust to. It’s all about how to relate to people, and I still find it difficult sometimes to understand how these interactions work, both personally and professionally.

While Hanoi has a population of around 8 million people, it still feels like a village. The city has grown fast, incorporating many former towns into its urban space over the last few decades, and somehow certain aspects of that village feeling remain. The city also has this air of authenticity and charm, in my opinion, more so than cities like Bangkok, Kuala Lumpur, or Ho Chi Minh City, the large metropolis in southern Vietnam. Things are changing fast, of course, but so far, I feel like these things are still alive in Hanoi. Of course, this is a very personal view and sentiment, so take it for what it’s worth.

There are two main reasons why I captured Hanoi at night. The first one is very unromantic. Since I have a full-time job and am a husband and father, evenings and nights are the only time I can go out to take photos. But, even if I would have time during the day, I deeply love Hanoi at night. The city becomes very different, especially in the residential areas. It gets quiet in those local neighborhoods quite early. After 10 or 11 pm, you hardly see anyone on the streets anymore. The chaos and noise are gone, while quietness and a soothing, sometimes eerie atmosphere takes over. That’s when I like to drive around on my scooter, to get lost in those little anonymous streets and alleys, trying to capture that very atmosphere.

“After 10 or 11 pm, you hardly see anyone on the streets anymore. The chaos and noise are gone, while quietness and a soothing, sometimes eerie atmosphere takes over.”

“Even though Hanoi is becoming more modern-looking, many people still value and want to preserve that sense of authentic charm.”

Hanoians are very proud of their city. Overall, they see the development and transformation as a big success, a testimony that Vietnam is doing well economically. But at the same time, they still put great importance on traditions. They also enjoy these alleys with their little coffee shops. Even though the city is becoming more modern-looking, many people still value and want to preserve that sense of authentic charm.

While everything seems to happen chaotically, somehow, it all falls into place at one point. There are systems, orders, and rules in place that lead to that chaos. Traffic is a good example: there are many unwritten laws and expectations in Hanoi’s traffic, so while it seems like one big mess, somehow, it still flows.”